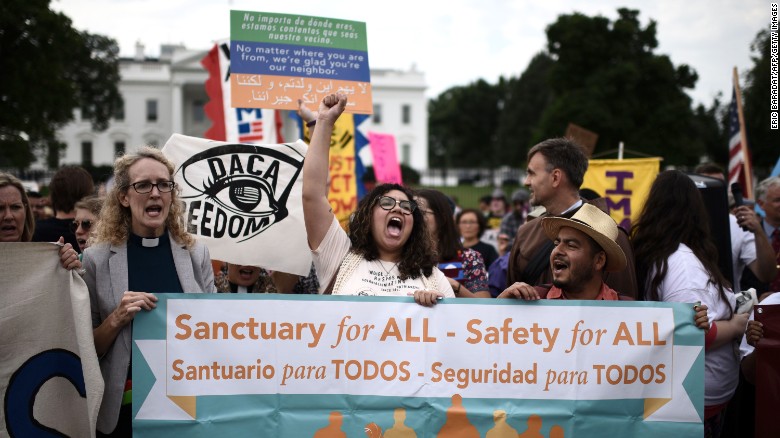 Young Dreamers share their thoughts on the Trump administration’s recent decision to rescind DACA. These students are referred to anonymously in the article.

Every student on campus faces trials, from completing stressful homework, to procrastinating on difficult projects, to enduring intimidating tests.

However, for a specific group of students, there is another reason to feel stressed and afraid. On Sep. 5, 2017, U.S. Attorney General Jeff Sessions formally announced the President’s Executive Order for complete termination of the Deferred Action for Childhood Arrivals (DACA) program. This is a program for undocumented children who were brought to the United States by their parents –– often referred to as Dreamers. DACA guarantees a deferred action for two years, protects children from deportation, and allows Dreamers to get a work permit. On campus, there is a large community of Latinos and Chicanos, in addition to a variety of other ethnicities, most of whom are protected by DACA. Many students now face the difficulty of a world without DACA.

Back in 2012, former President Barack Obama used his executive power to protect and aid Dreamers. Originally, during Trump’s campaign for office, he promised to do his best to dismantle the legacy the Obama administration had left behind. The application itself is a long and arduous process. One student with DACA comments on not only the frustration but also the fear caused by giving detailed personal information to the government.

“It takes money, it takes energy, and it takes time. It takes courage to even put yourself out there, and put your fingerprints, your personal information and be exposed to that kind of stuff,” the anonymous senior said.

It’s not only the fear of deportation that Dreamers face, but also discrimination and confrontation with law officials. Their parents did not want them to live in a country with poverty, crime, and lack of education. Another Dreamer talks about her fear of law enforcement.

“If at any moment you have a car accident, or if it’s not even your fault, or you’re just driving around and get into a scenario where police and authorities are involved, it’s scary. Every time I see a cop, it makes me nervous,” Anonymous said.

But what exactly are the effects on undocumented students? Unsurprisingly, the prospect of being deported terrifies many, but there is a deeper impact on students all over the nation.

“It’s emotionally, and mentally effective, it makes students realize that they won’t be able to have further education after high school, which makes the college application process even harder. It is a resource that is getting taken away from us, and it’s not fair. This is going to stop students from actually trying. It’s going to make it really bad for us because we lose hope. It’s hard to overcome it, but it [becomes a] distraction for everything we do,” said the anonymous senior.

Despite the difficulty, these Dreamers have not given up hope; they continue to work hard at school and dream of a better future. One Dreamer implores their peers to keep an open mind about DACA and those who benefit from it.

“I hope people begin to realize that we are here for a reason, and we’re not here to take people’s jobs and to try and make them look bad in any way. We want to do more than just work in this country, ” said the anonymous senior.

For these Dreamers, the U.S. is the only home they’ve ever known and DACA is a doorway to opportunity. A Dreamer makes it clear that she is here to stay: “We can prove a point and we’ll get somewhere.”