Gigi Hadid posted a pasta sauce recipe to her Instagram stories in September of 2020: soon after, the recipe went viral and continues to be a popular online recipe. 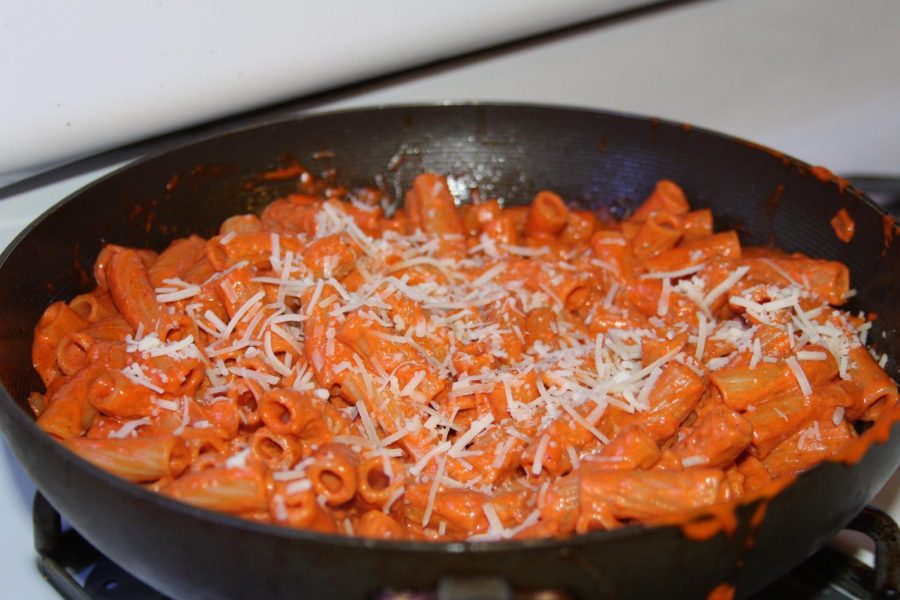 Gigi Hadid posted a pasta sauce recipe to her Instagram stories in September of 2020: soon after, the recipe went viral and continues to be a popular online recipe. The 25-year-old model used simple ingredients, with tomato paste and heavy cream serving as the base of the creamy sauce.

Intrigued by the craze, I tried the pasta recipe for myself. The ingredients include tomato paste, heavy cream, olive oil, onion, garlic, pasta water, red chili flakes, as well as salt and pepper. The sauce is considered to be a vodka sauce; however, the model noted on her Instagram that she did not have vodka at the time so it is not included in the recipe.

Hadid posted a slide-by-slide tutorial to make the sauce: the first step was cooking the onions and garlic, followed by the addition of the tomato paste, heavy cream, and pasta water. I followed her simple steps and they were easily self-explanatory. I appreciated the simplicity of the recipe, as many other recipes I’ve found online are overly complicated or difficult to follow. Her visuals are a helpful guideline to confirm your recipe is on track.

Hadid’s serving is sufficient; however, I doubled the recipe in its entirety for a group of five people. The substantial serving of onion seemed daunting at first (¼  cup for Hadid’s serving size); however, the onion taste became masked by the strong sauce. I did have some slight modifications for my pasta:l. I opted to leave out  the red chili flakes to make a more mild sauce. Personally, I think the sauce was strong enough that the spicy flavor would have been overbearing for my mild taste. Additionally, I used more tomato paste than the recipe calls for. I used Rigatoni pasta while Hadid used shells in her Instagram tutorial, but any type of pasta would work well.

First, the onions and garlic are sauteed in olive oil in a pan. The first time I made this recipe I used a small pan; however,  I quickly learned that as you continue to add the ingredients, a much larger pan is necessary. I began boiling the pasta water directly after starting the garlic-onion mixture and found that the pasta was perfectly ready when the sauce had finished. After adding the heavy cream and tomato paste, the sauce will turn into an orange, clumpy mixture— but don’t worry—-with a few dedicated minutes of mixing, the creamy, reddish sauce will appear.

For me, the sauce thickened after several minutes and adding pasta water as the final step helped immensely to thin the mixture. Adding the pasta was a difficult task at first. Careful not to splatter the sauce, I scooped the drained pasta into the sauce slowly and strategically..When I mixed in all  the pasta into the sauce, I added salt, pepper, and nearly a cup of parmesan cheese. (This cheese step is not in Hadid’s recipe; however, it added a nice “cheesy” element to the sauce). Finally, the pasta was ready.

My serving was sufficient for five people with leftovers for two. Assuming the pasta would be heavy, I served it with roasted brussels sprouts. I was correct: after several bites I was almost full; however, the creamy tomato sauce was too good to stop after just a few. My addition of extra tomato sauce was likely unnecessary, and if I make this pasta again I would stick to Hadid’s recommended measurements.

Regardless, the sauce was a complete success, and I will likely be making the sauce again, experimenting with various additions of cheeses, spices, etc.