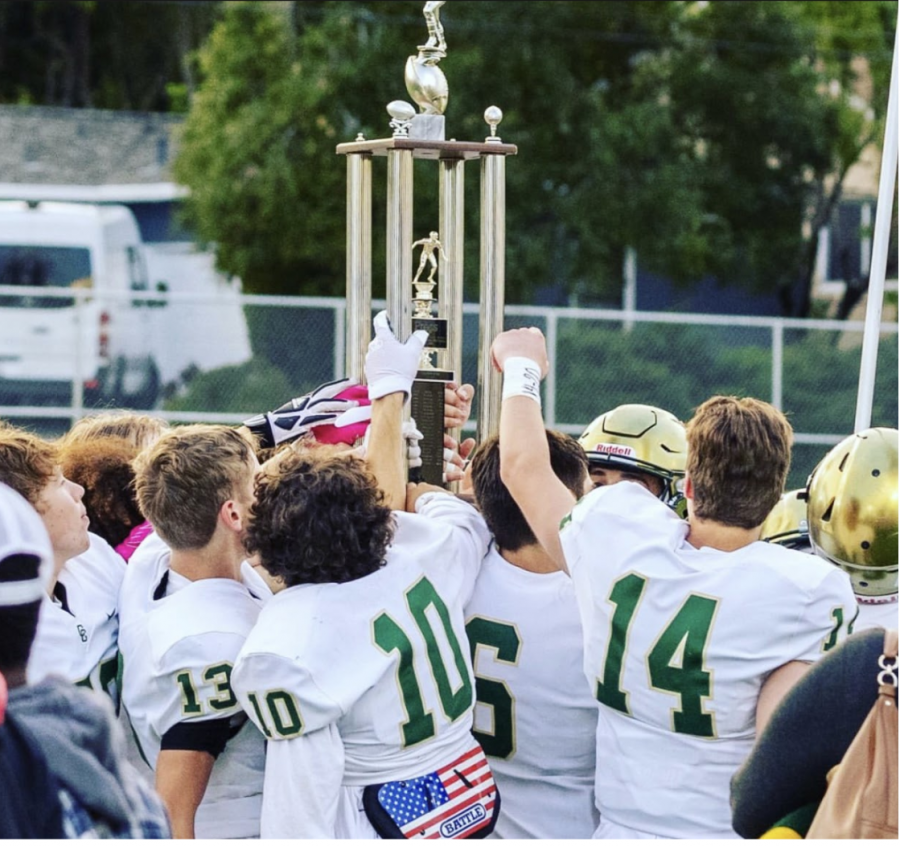 Saturday, October 30th, people from both the Petaluma east and west side communities gathered together to enjoy the annual Egg Bowl, a game that typically has bragging rights involved for either side of town. This time, however, a little more than just bragging rights were involved.

Going into the Egg Bowl game, on the season the Casa Grande varsity football team was 5-3 and the Petaluma varsity football team was 6-1. This game held so much importance for both teams, as both were one game away from being the league leaders, or getting closer to that league championship they long for. Both teams have also played so well all season that they are in the position for playoff berths depending on the outcomes of their last few games.

It was a great weather day for football. Sixty degrees, overcast, light drizzles here and there, but no overwhelming heat or cold to possibly hinder the game being played. Both sides had a student sections packed to the brim, with Casa Grande in full green and gold, and the Trojan fans in a purple storm.

Casa Grande was without one of their star players, defensive end Antonio Bernardini, due to an injury sustained a few weeks prior. However this was not going to stand in their way.

Casa won the coin toss, electing to receive the opening kickoff. The kick was a low and bouncy squib kick, meant to halt the possibility of a long touchdown return on the first play of the game. This didn’t stop gaucho senior wide receiver Caden Cramer though, as he bursted through the defense, finding a gap and flying down the sideline all the way to the endzone, leaving fans on both sides absolutely speechless. Though the two-point conversion was unsuccessful Casa was off to an incredible start in a game with extreme magnitude. Cramer shared his reaction and excitement after scoring on the first play of the biggest game of the season.

“I was feeling all kinds of emotions. I’ve been the kick returner for my team every year and had  yet to take one back before. One of my goals for myself was to take one back for a TD so from my own personal stand point I was just excited I was finally able to do that. And then bring the game into it and to start off the Egg Bowl with that touchdown just got me and all my teammates pumped up and got everyone ready to go. I think it sent a message to Petaluma that we came here to play” Cramer said

Petaluma then came down on their first drive, scoring in much less dramatic fashion. The Trojans went on a long drive, led by junior quarterback Henry Ellis. Ellis converted two tough fourth downs, ultimately finding a wide open receiver in the back of the endzone to give Petaluma a 7-6 lead.

Casa wasn’t gonna sit back and watch the game get out of their hands, as they opened the drive with a long completion to senior wide receiver, Shane Runyeon.  A few plays later, senior  quarterback, Jacob Porteous found his man, senior wideout Marcus Scott for an incredible acrobatic touchdown catch which made the score 14-7 Casa after a two point conversion.

At the tail end of the 1st quarter, Senior defensive lineman, Colin Patchet, forced a huge fumble, giving the Gauchos the ball back in Trojan territory. Casa continued the scoring streak, with a rushing touchdown by junior Ryder Jacobson. Marcus Scott then made an extraordinary one-handed catch on the two-point conversion, leaving even the referees in awe.

Petaluma would not watch the game get out of their hands, however, as Henry Ellis threw yet another touchdown to wide receiver Doren Shaw. On the very next play, Petaluma refused to let Cramer, the Gauchos return man stifle them for yet another touchdown, forcing a huge fumble, giving them possession at the Casa 20 yard line. At this point, Petaluma was driven, full to the brim with momentum, as Ellis found Doren Shaw for his third touchdown of the day, tying the game up at 22.

Following a rough drive for the Gauchos, junior Jack Larson came out to punt it back to the Trojans, giving them the opportunity to take their first lead of the game. Ellis then threw his fourth touchdown pass of the game under pressure, making it a 29-22 game in favor of Petaluma with little time remaining in the half. But this was no reason to panic for the Gauchos, as record-breaking quarterback Jacob Porteous connected on a long ball to lanky wide receiver, Shane Runyeon, with only 7 seconds remaining in the half. Porteous, on the very next play, found the all reliable wideout Marcus Scott for an easy touchdown, leaving the score a 29-28 Petaluma, with a whole half of football remaining.

The Gauchos kicked off to the Trojans to start the third quarter. As they were moving the ball, into gaucho territory, Ellis became out of sync with his star receiver Doren Shaw, getting intercepted by Wyatt Abramson, a play that truly shifted the tide in favor of the Gauchos.

Porteous began the next drive with a shovel pass to the running back, Jacobson, who was able to gain 25 yards before being taken down. Then, it was about time that Porteous found his big receiver in the endzone, as Shane Runyeon walked in for the easy score. After the two-point conversion, the Gauchos led 36-29.

After a long passing play downfield, the Trojans once again fought back into gaucho territory. Yet again, who but Doren Shaw would find the end zone, as Ellis found him for his fifth touchdown pass of the day. This made the score 36-35 Gauchos through 3 quarters of play.

Then it all came down to who had the most fight left in them for a grit and grind fourth quarter. It was an interesting start to the quarter for the Gauchos, as a bad snap sailed over the head of Porteous leaving the fans screaming, “NOOO!” But on a 3rd and 26 play, Casa got their swagger back, as Marcus Scott made a couple of men miss to gain all twenty six yards for a first down. Porteous was then able to connect with senior wideout Dylan Petersen over the middle, but he was tackled at the Petaluma one yard line. But the next set of downs, Porteous ensured the Gauchos came away with six, running it in himself for the score, making it a 44-35 ballgame.

As if Casa did not have enough momentum already, they were able to pin the Trojans on their own one yard line on the kickoff. That next drive, Henry Ellis was intercepted by Bladen Fuller and gaucho fans were screaming, “that’s game over!” However, sadly the play was called back on a defensive penalty. With 6:30 to go in the game casa had the ball back and was up by a score. Porteous found his man Shane Runyeon for two huge plays downfield to take the Gauchos deep into Trojan territory. Porteous then sealed the game on the next set of downs finding Marcus Scott over the middle for the touchdown. This made it a 15 point lead for the Gauchos, with the score at 50-35.

As if the game was not already out of hand and full of incredibly memorable plays, Cody Rodrigo, senior cornerback, left Gauchos fans with yet another memory, sealing the game with a falling interception of Henry Ellis and waving goodbye to the Trojan fans as the gaucho fans started screaming, “Na Na Na Na, hey hey hey, Goodbye.”

Caden Cramer ended off his unbelievable game with a 40 yard catch all the way down to the Trojan 1 yard line, with Porteous rushing in for the touchdown on the next play. The final score was 57-35 in favor of the Gauchos.

A gem of a game that likes to be one that would go down to the very last play, ended in a landslide victory for the Gauchos, who are now just one win away from a possible league title, as well as playoff berth.

Make sure to come out to Senior Night, and support our Gauchos as they try to extend the Friday Night Lights just a little longer!